Two months after Superstorm Sandy the disaster is not over and relief needs are still great. Homes are uninhabitable with black mold taking hold, heat and sanitation are still absent in many places. Yet the government response has been glaringly absent. As with Katrina and other recent disaster-and-recovery events city, state and federal agencies have handed off reconstruction resources and responsibility to corporations and markets.
By Diane Sweet 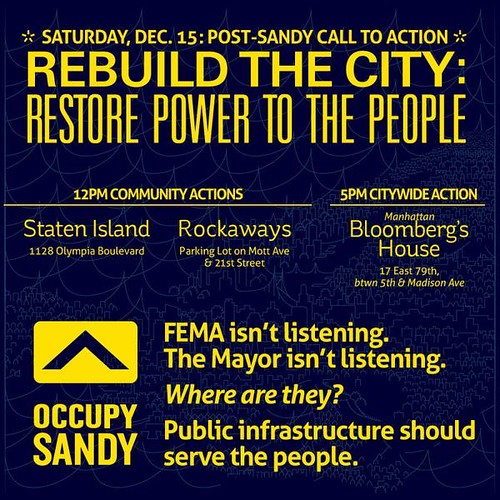 Two months after Superstorm Sandy the disaster is not over and relief needs are still great. Homes are uninhabitable with black mold taking hold, heat and sanitation are still absent in many places. Yet the government response has been glaringly absent. As with Katrina and other recent disaster-and-recovery events city, state and federal agencies have handed off reconstruction resources and responsibility to corporations and markets.

That hand-off has pushed affected people further out of their communities, further into crisis and vulnerability, and further from the decision-making tables that allocate public resources. Where government has failed, Occupy and other groups stepped in.

But we now understand that climate change has turned a corner: we will be hard hit again by extreme weather events. And so we ask whose interests our government serves? Is it polluters, predatory lenders, and disaster profiteers? Or can we build a stronger, better, resilient New York where all of us, regardless of race, class or power, can weather future storms?

Isn't it high time to ban members of Congress from owning ANY individual stock?
By Frances Langum
comments
Oct 19, 2021

Tucker Refuses To Say What The Fox News COVID Policy Is

Laughing like a hyena was Carlson's tactic to avoid giving a real answer about what Fox News requires.
By John Amato
comments
Oct 19, 2021

Senators Joe Manchin and Bernie Sanders were filmed walking together outside the US Capitol.
By John Amato
comments
Oct 19, 2021
View All »

Eric Trump criticizes Biden for spending too much time at his personal property. (Trump spent 1/3 of his time as so-called president at his golf clubs, playing golf.)
By Frances Langum
comments
Oct 19, 2021

Colbert Has The Real Story About Russian Hotel Room