OWS: Bloomberg’s Army Will Not Silence Us

The first anniversary of Occupy Wall Street was a joyous affair for the 99%...
By Diane Sweet

The first anniversary of Occupy Wall Street was a joyous affair for the 99%.

Yet regrettably, it was also a day that illustrated how Mayor Michael Bloomberg’s ‘private army’ has been increasingly unleashed to beat, arrest, imprison, and broadly suppress OWS.

Please post your videos, photos, and stories about how your rights were infringed on the Occupy Bloomberg’s Army Facebook page.

Occupy is a nonviolent movement, but this has not prevented Bloomberg’s Army from engaging in targeted arrests of specific organizers as well as random street ‘snatch and release’ intimidation tactics.

On September 17th not even the constant drone of helicopters overhead could drown out the screams of ‘I’m a journalist’ from the reporters who were arrested merely for practicing their and our right to freedom of the press.

And not even a cry of ‘I’m a City Councilmember’ was enough to staunch the established policy of brutality within the Mayor of Wall Street’s Police Department.

The message being sent by Bloomberg’s Army is being heard loud and clear. In Bloomberg’s New York: anyone who supports Occupy Wall Street in any fashion is being made an example of.

Were you one of these people extra-legally arrested or assaulted, or have you witnessed someone who was?

We will not be stymied by the over 180 arrests on our anniversary, nor intimidated by the unprovoked and random nature of so many of them.

All Roads Lead To Wall Street 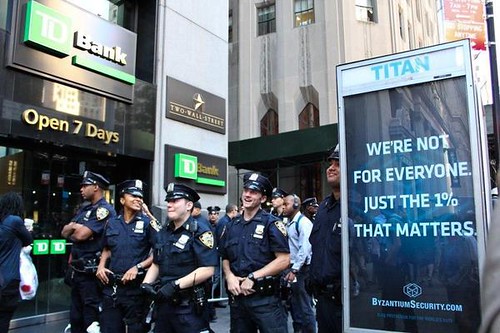 Rep. Jeff Fortenberry allegedly lied to the FBI about receiving contributions from a foreign national via "conduit" contributions.
By Karoli Kuns
comments
Oct 19, 2021

The Hungarian Nazi attacked the Transportation Secretary for taking a paternity leave and being gay.
By John Amato
comments
Oct 19, 2021
View All »