Michael Steele believes if you build a totally-not-racist Republican Party, they will come.
By driftglass

For those of you who are late to the party, Michael Steele is the former RNC chair who swears that, sure, before he ran the party it was, indeed, full of racists. However, during the brief interregnum when he was party chair, he drove all the racists out of the GOP -- just like Saint Patrick drove the snakes out of Ireland! But once he had been cruelly deposed, all the racists came back. Sad!

And thus, in his own mind, Michael Steele -- the Black man who hired himself to front for a party defined by contempt for people of color -- bears no personal responsibility whatsoever for the GOP being what it is today.

And for his sins, Michael Steele is now a paid MSNBC contributor and was awarded a Senior fellowship at Brown University's Watson Institute for International and Public Affairs.

He's also got a podcast!

And in a recent episode, discussing The Republican Party with the unctuous Alice Stewart, we learned about Michael Steele's path to victory.

Steele believes that the key to glorious Republican victory and the enactment of the despicable GOP agenda is to cut the base loose. Just grab 'em by the Klan hood and chuck 'em out the door. How exactly he would go about kicking them out of the party when, for all intents and purposes, they are the fking party I have no idea -- but in response to those who insist they still want Trump around -- still want him to be part of the party -- Steele says:

"But do we?  Do we?  Do we really still want him around?  I'll be honest with you, I don't.  I think he's an abomination.  I think he...I think he's an apostate to everything I grew up believing in the party, even in the face of some of the ugly stuff in the...recent history of the party.  I think Trump has been an avatar for a lot of that...really given a breath of fresh air to the Southern Strategy... "

And in that confession, and in this one...

"Like the worst cancer you could possibly have, cut that shit out of your body.  You need it gone. "

"To be honest with you, I don't want...I don't want a redneck white nationalist racist to be a Republican.  I don't want them in my party."

Until Trump ripped the mask off of his party, Steele could get away with the shuck that, hey man, the party wasn't this was when I joined up, when I rose in its ranks, or when I was its national chair.  Because to admit that would be to confess what everyone knows: that to succeed in Republican politics, either Mr. Steele had trained himself to not to see what his party truly was, or he knew that, as a Black man willing to swallow his dignity and front for a racist party, his future was secure...as long as some fool didn't come along with a very big megaphone and give the game away.

And then along came this fool with a very big megaphone -- 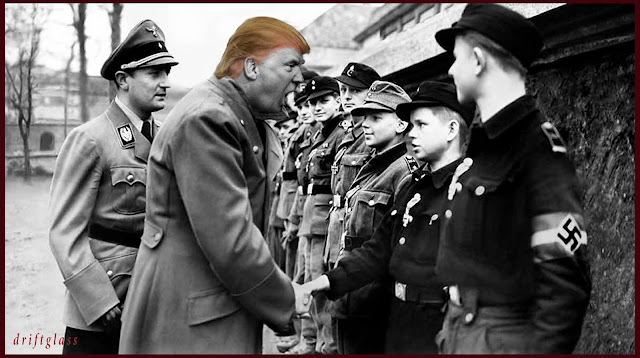 So the only way Mr. Steele can continue to keep his pathetic delusions intact (and continue his cable teevee viability) is to conjure into existence an entirely imaginary future Republican party full of so many rational, honorable humans (all of whom agree with the GOP's depraved agenda) that they can not only displace the entire Republican base, but will flock to Steele's banner in such numbers that they can sweep this New GOP to power and something something freedom.

When pressed on where exactly all these people are going to come from once he somehow managed to kicks 90% of Republicans out of "his" Republican Party, Steele gets very metaphysical.  As if he were building a ball field in the middle of an Iowa cornfield because a disembodied voice told him to.

And when pressed even further for any example of a working actual baseball field of sane Republicans, Mr. Steele had to go all the way back to the early 1990s when he was chairman of the Prince George's County Republican Central Committee and he and a small band of Republicans managed to get a few reforms passed.  Property tax stuff.  Charter school stuff.  That sort of thing.

That's it.  That is the quarter-century-old weak reed on which Mr. Steele's whole fantasy future GOP rests.

And this really is all that remains of the mopes who think Trump is icky but continue to remain loyal Republican party members.

This is the life-long Republican hood ornament who believes that the key to the future success of his GOP consists of...

What Steele is proposing, in effect, is that Baskin-Robbins keep their name, but stop selling ice cream and instead offer the public what's left over -- empty cones, tiny spoons and napkins -- on the expectation that even bigger crowd will show up for that.

Excerpted with permission from Driftglass.

The FBI has reportedly launched an investigation after police officers in Missouri were seen allowing a K-9 unit to attack a restrained man.
By David
comments
Sep 26, 2021

The next presidential election may not be close enough to trigger the election theft mechanisms the GOP is putting in place, but they'll be available to the Republicans in the future.
By Steve M.
comments
Sep 26, 2021

In a profoundly detached fit of magical thinking, GOP leader Mitch McConnell told journalists Bob Woodward and Robert Costa that the Trump era was on the wane.
By Kerry Eleveld
comments
Sep 26, 2021

Pat Toomey Lies About Trump's Tax Cuts Paying For Themselves

And CNN's Jake Tapper was about as useful as a potted plant when it came to fact checking him.
By Heather
comments
Sep 26, 2021
View All »

PA Sen. Pat Toomey lies about the fact that the debt ceiling needs to be raised because of spending Congress has already approved, and about Trump's tax cuts being paid for, which they weren't.
By Heather
comments
Sep 26, 2021

After the Cyber Ninjas admitted Biden won the election after their 'fraudit' in Arizona, Trump lied to his minions at rally telling them the results proved he won.
By John Amato
comments
Sep 26, 2021

Joe McCarron, 75, who was featured in a video being removed from Letterkenny University Hospital against the advice of his doctors, has passed away.
By Ed Scarce
comments
Sep 26, 2021

“Of course, having her I think might be better than having your existing governor, if you want to know the truth,” he noted, prompting overwhelming boos from his crowd of mostly maskless supporters.
By Ed Scarce
comments
Sep 26, 2021

Fox's Rachel Campos-Duffy, Will Cain and Pete Hegseth push the conspiracy theory that the only reason the Biden administration, the CDC and Democrats want people to get COVID boosters is because of political donations from big pharma.
By Heather
comments
Sep 25, 2021
Visit CLTV »